You are a science-fiction writer, sat in front of your desk. A blank Word document is open on the screen in front of you. The luminescent screen of your new Windows 95 PC is the only light illuminating the room. You often feel that not much will change in your lifetime, despite your tall tales. When you imagine the far future you still see the same brands, companies and conglomerates as the ones we have today. Surviving like the grand unbroken lineage of some Teutonic family tree that passes unscathed through æons of change. You start to write a story about Bill Gates, as though his story were akin to the Norse Sagas – great boastful tales of death and marriage, strength and revenge.

You lay out a basic sleeping mat on the cold stone floor of what was once the Grand Hotel, now reduced to ruins by the constant bombardment of the enemy drones. It has been thirty years since the war started; you move from building to building trying to survive, and continue to write software in support of the cause. As you huddle next to the fire you get out your electronic writing tablet and begin to write a series of firmware updates to the Helios satellite. You imagine a greater scale of what you are doing – although it is difficult, you see a picture of the future in your mind.

You find yourself just off the coast of Denmark amongst a group of seafaring monks, who are recording stories and tales throughout the Danelaw in the year of our Lord 878. The sea has been rough and barely enough food has survived the journey due to the temperature, which is warm for this time of year. You are glad you can see land once again, and set to recording the day’s ventures in the ship’s journal.

You start to write the first sentence of a story that tells the tale of yourself in twenty years time.

You sit in a black plastic chair inside the 2nd floor rented office space of Shanghai Tower. The monolithic tower has been left half empty after the events of the last few years. You are focusing on multiple online projects with a small team of seven. A Bitcoin trader – sat opposite you – is eyeing his Bitcoin trades on his Google Glass whilst staring at the people in the office building opposite yours, who are frantically moving from office-divider to office-divider zapping documents into each others in-trays.

You are soon to release an app called PLACE, an acronym standing for Perceptive Language And Conical Energies’. The sheer absurdity of the name has put it as strong contender and it will likely be called that despite your reservations – hyperbole sells and niche markets are common territory for media start-ups. Last week alone saw the release, and subsequent sale to Google, of several new-age therapy apps that are co-mixing ancient systems of divination with the ever increasingly complex systems of daily life, the stock market and socializing. Runic geomancy automatons are all the rage in the office spaces this month, you and your friends have been using Celtic runes as emoticons in a social media app called Volsung. 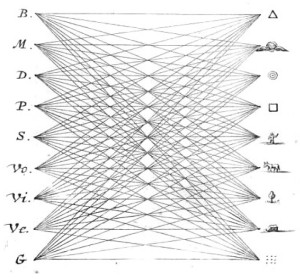 You decide to open one of the apps you downloaded last week.On your tablet screen the soft *plink* of the opening title has the words “YOU ARE A SENTIENT OCEAN” in white writing on a pastel-pink background. It feels like you are in the opening sequence of some trashy 70’s sci-fi novella. A large button in the center of the next screen invites you to begin by “imagining you are another person on the planet, from another time perhaps, or another country.” A looped recording of wind chimes plays in the background. By clicking through the menu system it informs you that you can “learn to do this everyday by rolling for a different set of stories from the interior of another’s brain.” It is a hexagrammatic system, based somewhere between a dice game and iChing. Each day a different set of thirty-six thoughts are uploaded and each day you roll one of the possible forty-six-thousand, six-hundred-and-fifty-six different combinations. The first three random rolls form a sentence called the mundane trigram and the last three rolls form a paragraph called the native trigram. You grab a plastic six-sided die that you had 3D printed out that morning, and roll for a combination…

Please have a six-sided die to hand.

[2] You find yourself thinking about your..

[1] .. whilst staring off into the middle distance.

[5] .. which draws the attention of the person next to you.

[6] .. ignoring what your mother told you that morning.

[1] You bring up the window containing the email from your divorce lawyer. You have hired the cheapest Legal Automaton on the net but still hope you won’t lose the house in the settlement.

[2] You’re alone on a seashore. Waves pound the rocks, splashing salt spray onto your face.

[3] You wake up in the dimly lit cargo hold of an M-Class star cruiser. You can tell from the faint humming and vibration of the surfaces that the ship is travelling at a great speed.

[4] You are in a tiled bathroom in the basement of a trendy westernised bar on the edge of Singapore. You look in the mirror at the dishevelled clothes and try to neaten yourself up before going back out into the crowded dancefloor.

[5] Your aeroplane lands safely on the water runway of Hanoi international. You can see the tips of skyscrapers unassumingly jutting out from beneath the waves, like hairs pricked up on the back of a giant sea creature.

[6] You stare out through the marble pillars of the Basilica, watching the people mill around the courtyard in the unforgiving midday sun. The purple robes swing silently from crudely erected wooden poles

[1] You hear a faint siren-like voice, drifting through the air across a great distance. You can’t make out the words being sung but it sounds like a song of despair and struggle.

[2] You are suddenly surrounded by a deepening darkness, as though you have been thrown into the bottom of deep pool or bucket of tar, your movement and senses slowed to a crawling pace.

[3] You can smell a strong burning akin to dry grass or mildew, its pungent odour causing you to choke and leaving a bitter taste in your mouth.

[4] You see something in the distance approaching that at first seems like a burningly bright light, but as it comes ever closer you begin to make out all sorts of fine details upon this magnificent behemoth.

[5] You find a bottle containing a dark and viscous liquid with strange runic symbols painted on its outer surface and you decide to take a sip. It is sickly sweet and leaves a strong medicinal residue upon your tongue.

[6] You notice someone coming over to you holding up a hand signal with their thumb held between two fingers, they then precede to softly stroke the top of your right hand, causing the hairs to stand on end.

[1] You can’t remember ever feeling this still and content, it comes with a worrying mix of self consciousness and second guessing, being comfortable is awakening a destructive side of you.

[2] You are bored of waiting. The original buzz of anticipation that first gripped you has been drowned by a wall of indifference.

[3] You have a warm feeling of being connected to all those around you and hope that your act of generosity is something more than the sum of its parts.

[4] You find yourself thinking in your second language, or at least your thoughts have the tone of it, and it relaxes you; for a moment you feel that perhaps people will be able to understand you perfectly.

[5] You begin to tremble with fear as you realise that you have made a series of terrible mistakes leading up to this point.

[6] You never realised before how fucking stupid these little details are. You swear that after today something has to change.

In your air-conditioned office there is a simulation of a cooler, more temperate environment that allows you the habits of an entirely different climate. Your food has not gone bad.

Francis Patrick Brady is an artist, writer and lecturer living and working in Malmö, Sweden. Born in Toronto, Canada but growing up in Sheffield, Yorkshire, he holds a degree in Fine Art from Chelsea School of Art and design, London. He does spoken-word performance, installation and role-play exploring the the magic circle of media and cryptographic storytelling. He also runs workshops and Lectures at Chelsea School of Art and design and Bristol UWE university, talking on Digital Culture’s play-phase and ‘Pixelocracy’.