I arrive in New York. The plan is a road trip, with friends, to New Orleans, Louisiana, in time for the 21st of December – four days after my birthday, four days before Christmas; also the date  on which the world ends, according to a surprisingly large number of people. Every apocalypse has its supporters, but not since the millennium has there been this much consensus among doomsday fans.

Numbers – the way we write them – have a habit of rolling over. As numbers are infinite, it would be impossible to have a different symbol or word for each of them, so we adopt a logical short-hand. In the commonly used decimal system, we have symbols for all natural numbers from 0 to 9. What happens after ‘9’? We add an extra place at the start of the number for the next power of ten and roll the first digit back to 0 – ‘10’. After ‘99’? We add another digit to the number and roll it over – ‘100’.

The same happens for the Mayan calendrical system, though it’s a little more complicated. Most units progress in powers of 20, except for the winal, which has a power of 18 to more accurately approximate the solar year1.

So what happened on the 21st of December, 2012? The numbers rolled over, leaving us with a date of 13.0.0.0.0, in an ancient calendar. This is what happened on the millennium – a whole lot of arbitrary zeroes. The Mayan calendar doesn’t end2 – so why the mystery? Why the UFO devotees on southern French hilltops, waiting for their cosmic rapture? Why the huge upsurge in survivalist bunker sales?3

It’s all Terence Mackenna’s fault. The legendary psychedelic shaman (and creepy voice behind the Shamen’s Re:Evolution)’s study of the I-Ching (under the influence of magic mushrooms) led him to a new and strange theory of time, based on the concept of the novelty of events, versus their stability, at different points in time. He found that this numerological data could be plotted and manipulated mathematically, and with the help of programmer Peter Mayer developed a piece of software they called Timewave Zero. With a little creative thinking, sleight of hand, and a knowledge of the New-Age beliefs already extant about the coming 13th B’ak’tun, McKenna predicted that there was a vast aberration in novelty due to occur on the 21st of December 2012, with concomitant cataclysm.

The universe is not being pushed from behind. The universe is being pulled from the future toward a goal that is as inevitable as a marble reaching the bottom of a bowl when you release it up near the rim. If you do that, you know the marble will roll down the side of the bowl, down, down, down – until eventually it comes to rest at the lowest energy state, which is the bottom of the bowl. That’s precisely my model of human history. I’m suggesting that the universe is pulled toward a complex attractor that exists ahead of us in time, and that our ever-accelerating speed through the phenomenal world of connectivity and novelty is based on the fact that we are now very, very close to the attractor.4

McKenna’s status as a guru for the psychedelic counterculture ensured that these beliefs were widely disseminated, coming to a head on the date itself.

Humanity has a thing for Apocalypses – they span cultures so remote that either it’s an innately human idea (something from Jung and Campbell’s myth soup) or it goes way back to the dawn of humanity, and diffused from there5. Apocalypse is the inevitable counterpoint to Genesis – but the universe had to come from somewhere. Why does it have to end?

It’s notable that while much apocalyptica these days is based on material, secular concerns, people’s beliefs, narratives and responses are often decidedly mythopoeic. Thus, it’s important to study modern, scientific apocalypses with an awareness of their mythological ancestors6.

Back to New York: I’m there not long in the aftermath of Hurricane Sandy. Many have died, and flooding has put out many essential services. The city – star of so many disaster movies – had been shaken by this demonstration of nature’s destructive powers.

I take the L-train to Coney Island beach – no one’s there but crisis relief teams and another man taking photographs. ‘Make sure you get a birdy in the frame,’ he tells me, ‘to get that disaster aesthetic’. 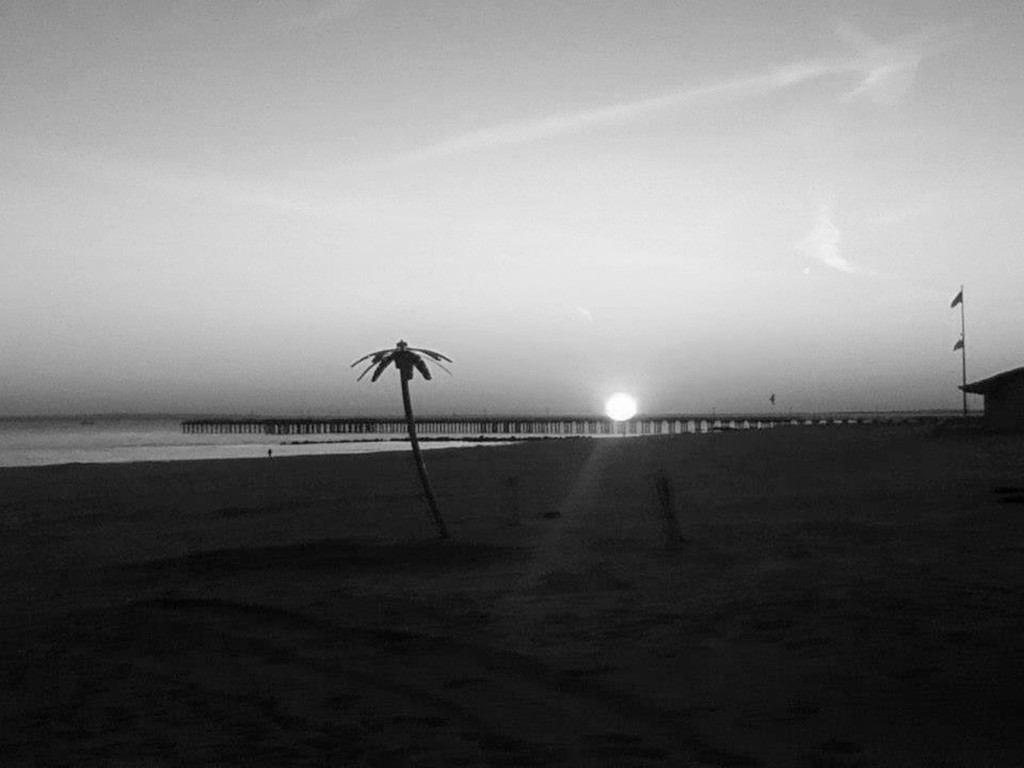 A couple of weeks later, I’m in North Carolina with my friends. After stopping in Asheville, a kind of hippie Xanadu nesting high in the Appalachians, we drive to Marshall, a small nearby settlement. There’s a lavish local nativity play going on in the central streets, but frankly I’m tired, and go on my own to the only bar in town, Good Stuff. Sitting outside with a beer, a wildly bearded old man leans in.

‘Where you from, Europe?’

‘Yes, England’. I’ve been getting a good response recently, just for being from England.

‘Did You Know that the EU is a plot set up by Fascists?’

I’m intrigued. My party arrives and he invites us to camp in his yard, and we gratefully accept. He buys a case of PBR and after the rocky horror of driving up the hill to his place, we set up camp, chopping firewood and pitching our fifteen-dollar tents in the declining light. 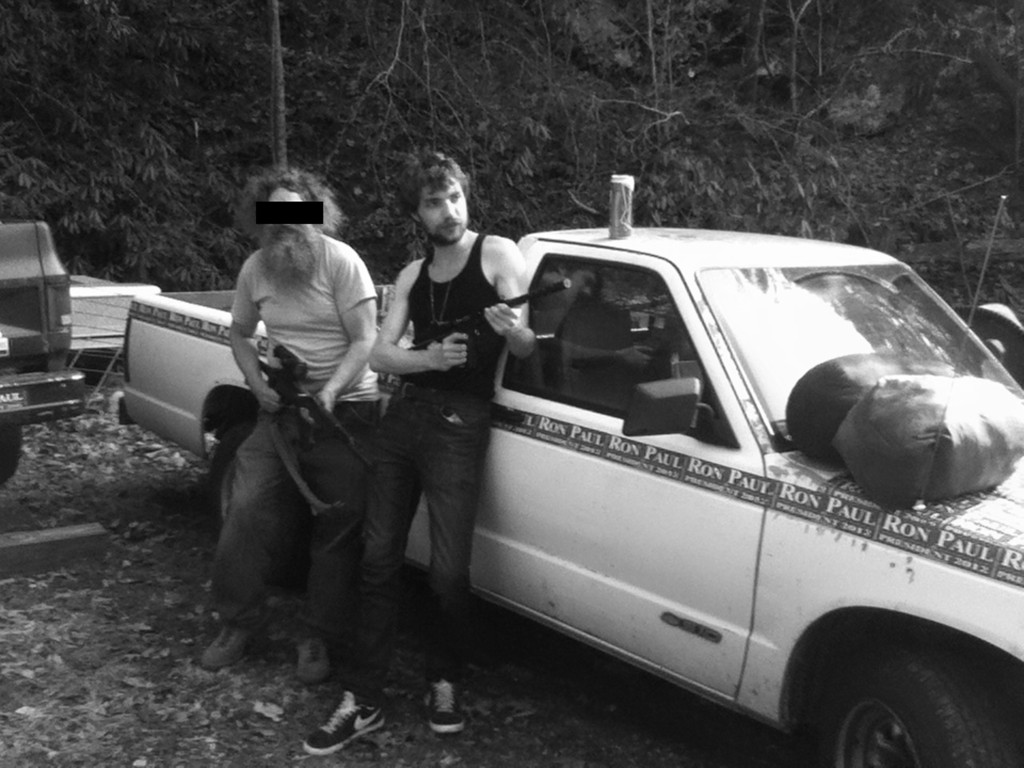 Don7. is an extremely kind, gentle guy, with extreme political views (when we visit town the next morning, others hoot about how he had a captive audience in us). He’s a libertarian – he shows us his pick-up truck, plastered with Ron Paul campaign stickers. ‘There are one-hundred-fourteen Ron Paul stickers on that truck’. He’s a survivalist – he stays in a caravan next to the house he’s working on, ready for when the shit hits the fan. ‘I’ll probably be dead before I finish it’. He’s a gun enthusiast, proudly showing us his stash of rifles and letting us hit tin cans with them, even though he’s never shot an animal in his life (he’s a vegetarian).

Most of all he’s a conspiracy theorist with apocalyptic beliefs. He darkly refers to Obama and Mitt Romney as ‘Obomney’ – choice is an illusion – and is happy to share his detailed, well-researched – but to me, screwy – economic views. According to Don, by the end of 2014, the US will have reached a state of such fiscal catastrophe that government and services break down, and the only people who will survive will be those willing to take to the mountains and look after themselves, like Don himself.

This feels like wishful thinking. All a libertarian ever seems to want is to live on his own in the mountains, unmolested by government and nested with his guns. When we leave, he grudgingly poses for photos with us (only if he can hold up an anti-Obama placard) and tells us to tune in to Alex Jones on the radio. (A week or so later, a young man called Adam Lanza fatally shoots 26 people at Sandy Hook elementary school in Connecticut. I wonder what Don and friends make of that; I imagine they’ll find a way to make it further reinforce their views).

Wishful thinking plays a huge part in apocalyptic mythmaking. The word apocalypse itself comes from the Ancient Greek apokalypsis8. – unveiling, revelation9. It implies not just an end of current ways, but a paradisiacal state afterwards. The word for this heavenly state is the Eschaton.10

In the Bible, angels throw sinners like grapes into a winepress, till their blood flows out and floods the earth11Revelation 14:14-14:20. Christian believers have been spared these enormities, having been miraculously protected by God during an event known as the Rapture12. After the purge of the sinners, God’s chosen live under Christ’s peaceful reign for a thousand years13.

Earth’s apocalypse is, then, the birthing pains of a greater earth. A 1,000 year Teutonic Reich, free from race-mixing? An end to capitalism14, and the establishment of socialist utopia? A human-free paradise for the world’s flora and fauna?

It will come as no surprise, therefore, that some groups actively campaign for the establishment of the eschaton – often supposing that they belong to the elect few who will get to live in it, and survive the brutal horrors of the transitional apocalyptic period.

There’s a phrase – to immantetize the eschaton15 – which means exactly that. Methods range from the magickal to the scientific. Fringe Christian groups, such as the 7th Day Adventists and Blessed Hope Ministries regularly pray for the Second Coming. Nikolas and Zeena Schreck16, of the death-rock band Radio Werewolf, intended their music to contribute magickally to the establishment of a new era of what can be called, for want of a better term, Satanic Nazism17.

The Order of Nine Angles (ONA) is a Satanic organization with a secretive cell structure reminiscent of terrorist groups. It is asserted18 that ONA is headed by David Wulstan Myatt (aka Abdul-Aziz ibn Myatt). Myatt converted to Islam in 1998 and has had his writings on suicide bombings published by Hamas.

What is extraordinary is the suggestion that both his Nazi and Islamist activities are mere tools to immanentize an eschaton – that he is playing extremists as pawns in his satanic apocalyptic game. “Even more astonishing than [his transition from neo-Nazi to Muslim] is that it seems both his Nazism and Islamism are merely instruments for the ONA’s underlying sinister esoteric plots.”19

So far (as far as we know) deliberate attempts to engineer the eschaton have been unsuccessful. With the appointment of Ray Kurzweil as Google’s Director of Engineering, how long will this be the case?

As appealing as eschatological myths continue to be, change still tends to present itself gradually rather than in the form of cataclysmic events. Why do we keep buying into new doomsdays, when prior prophecies have failed?

21st December, 2012, New Orleans – this city won’t be here in a hundred years, if the predictions about rising water levels are true. You can only build so many levees.

What does the big day have in store? A week back in Baton Rouge, I see a poster for a huge apocalypse gathering in New Orleans. Throwing journalistic credibility to the wind, I forget to go, and I find myself wandering the streets, drinking. Turning onto Frenchman Street, I find a group of people wearing wild clothes, soundsystem in a shopping trolley blasting It’s The End Of The World As We Know It (And I Feel Fine). These guys want to go out in style, so I join them.

As expected, our doom’s allotted time comes and goes without incident. We continue to revel with a bittersweet mix of relief and just a little disappointment. Better luck next time?

(1)This kind of irregular counting isn’t so unusual – think of a clock, with 60 seconds to the minute, 60 minutes to the hour, and 12 hours to the half day.^

(2)There are more units, going up to one alautin – over 63 million years in the future.^

(5)For example, the Hopi and Viking cultures had very little opportunity for cultural interchange, but both contain a pre-ordained, world-ending event in their legendaria.^

(6)Darren Aronofsky’s film Noah (2014) is a recent example of a mythological examination of a modern concern, namely the way humankind treats the environment. It also notably tries to fuse the scientific and Biblical creation narratives.^

(9)The New Testament’s final, bloody book, Revelation – source of so much western doomsday lore – is called ‘Apocalypse’ in both the original Greek and the Douay-Rheims translation (the standard for English-speaking Catholics).^

(13)The belief in a thousand-year utopia is called millennialism (or chiliasm) and was also an important part of the Nazi belief system. Millennialism is distinct from millenarianism, a more general word for apocalyptic beliefs.^

(14)The phrase Late-Capitalism comes pre-loaded with a teleological view of human history.^

(16)Zeena is also notable as the first person to receive a Satanic baptism, from her father, Church of Satan founder Anton LaVey.^