Benedetto Croce once said that ‘all history is today’s history’. We must keep this dictum even more closely in mind when confronting science fiction: rather than fantastic predictions of things to come, what SF really offers us is the unpalatable truth of our own age, sugar-coated by some kind of distance (events take place in the future, or in some parallel universe with alternative physical laws, for example). That this truth is historical in nature is most obviously the case in utopian/dystopian novels such as Yevgeny Zamyatin’s 1921 We, which offers a sophisticated exploration of Soviet collectivization, but can be detected in any SF, such as the post-K. Dick Cyberpunk of the 1980’s, which Frederic Jameson called ‘the supreme literary expression, if not of Post-Modernism, then of late capitalism itself’. If for Zamyatin the crisis was taking place at the level of an individual’s relationship to society, then for William Gibson, Neal Stephenson, et al. writing in the 1980s, it was a kind of crisis within the thinking subject itself as it grappled with the unattractive mixture of Cold War politics and MTV, cheap computers and Reaganomics. 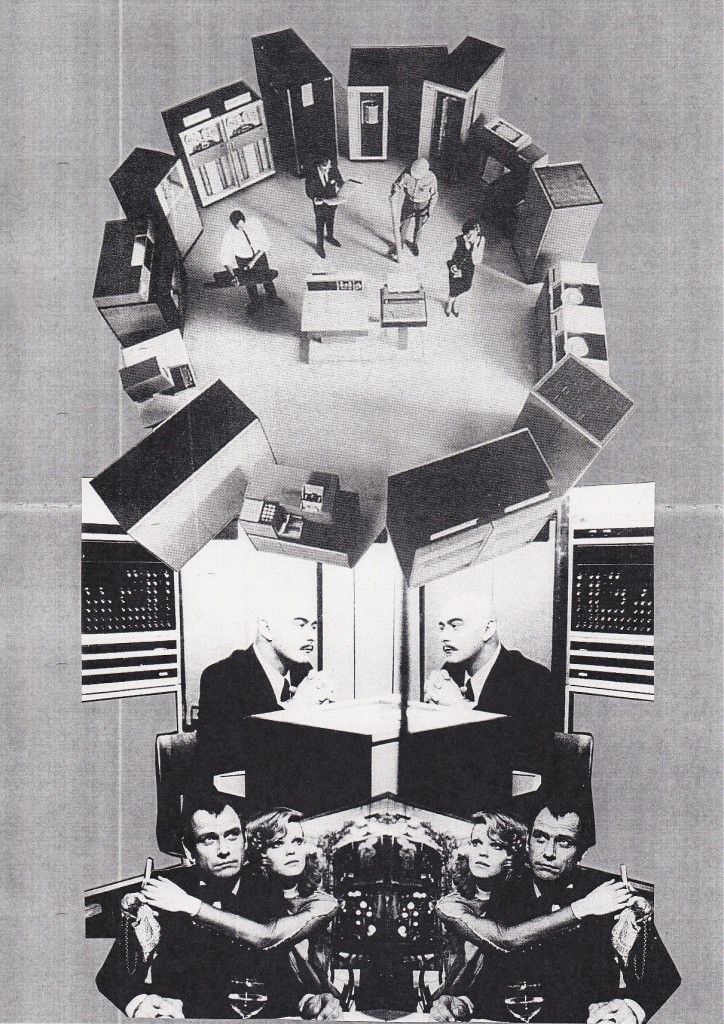 But it was in the 1970s that computational capacity and economics became eager bedfellows, and they have stayed that way ever since. Where once econometricians carried out rudimentary statistical analyses with mechanical calculators, and Keynesians argued in terms of nationally aggregated consumption, the economists of the 1970s were able to assemble and manipulate vast data-sets detailing consumption of individual products; clothes, bicycles, whatever. With the cost-of-computation barrier effectively lifted by advancing technology, statistical correlations and consumer behaviour equations could be produced in incredible detail. Want to know whether to invest capital in a nylon plant or a steelworks? Just run the model.

It was around this time that such large computer simulations began to be called world models, none more appropriately so than that of MIT systems theorist Jay Forrester, used by the environmental think tank Club of Rome in their 1972 analysis of ‘the present and future predicament of mankind’. Limits to Growth, the published account of that analysis, sought ‘to examine the complex of problems troubling men of all nations: poverty in the midst of plenty; degradation of the environment; loss of faith in institutions; uncontrolled urban spread; insecurity of employment; alienation of youth; rejection of traditional values; and inflation and other monetary and economic disruptions’. The simulation was run over various parameters: artificially suppressed population growth, wars, greater or lesser pollution, and so on. The outcomes of such simulations were plots of expected evolution of all the inter-linked variables; numerical measures, somehow, of the diverse and esoteric categories above-mentioned (what is the unit of loss of faith in institutions?). Thus it is perhaps at this point that computer simulations took on properly oracular significance.

Enough non-fiction: let us meet a film that straddles strangely the topics of postwar economic planning and late capitalist subjectivity. Rainer Werner Fassbinder’s only SF work, the 1973 TV film Welt am Draht (World on a Wire), tells the story of muscular computer scientist Fred Stiller, employed by the local Institute for Cybernetics and Futurology to work on just such a world model as we have discussed. Stiller is recalled to the institute from his holiday hut to head up the project Simulakron, after the mysterious death of his predecessor, Professor Vollmer.
At a dinner party held by the Institute’s director, the inscrutable Herr Siskins, Stiller is introduced to Gloria, a beautiful blonde woman.

“Is it true you’ve created an artificial world?” she asks.
“World is an exaggeration. Currently we’ve some 10,000 identity units. That’s all we need for now. The world in a nutshell, you see.”
“10,000 people? They’re people, aren’t they? Or?”
“As you like. To us they’re merely electronic circuits. But to them… They live just like we do… Build roads, listen to music, eat…”
“And make love with each other?”
“Yes that too. Make love, enjoy life, have kids…”
“How exciting.”
“Making love?”
“Yes that, but I mean living in a box full of microchips.”

No sooner are we introduced to the notion that the model in Simulakron is somehow overflowing its status as a purely instrumental device of scientific research, than Stiller’s friend, Institute Head of Security Günther Lause arrives at the party. He has something urgent to tell Stiller about Vollmer’s demise, that it had to do with what Vollmer had uncovered concerning the Simulakron: knowledge ‘that would mean the end of the world’. But at the moment of revelation, a smashing glass dropped by Gloria distracts Stiller and he turns his back on Lause. A piercing synthesizer noise accompanies Stiller’s reversion to his friend; to Stiller’s horror, Lause is vanished without a trace.

From here we move rapidly into SF existential angst. Stiller jacks into the matrix of Simulakron and meets Einstein, the so-called contact unit and the Institute’s fixer within Simulakron. The only unit aware that he lives a simulated life, Einstein carries out small tasks to ensure the stable operation of the simulation. It’s driving him mad, and he wants to transfer his consciousness into the body of someone from the reality ‘above’. Stiller thwarts his attempt but seeds of doubt are sewn in his mind about the reality of his own world. Could it not also be a simulation itself?

In fact, as soon as we attempt to distinguish between reality and artifice in Welt am Draht, we become uncomfortably aware of their constant and mutual slimy incursions across the permeable border (barely) separating them. Fassbinder himself knew this, when he said that the film used an ‘old philosophical model which here creates a kind of horror’. On one hand, we have the horror of Cartesian doubt: Stiller thinks, therefore he is… what? A collection of electronic circuits? And for whom does he think? A sardonic twist occurs when Herr Siskins turns over the use of Simulakron to the United Steel Incorporation and the government’s economic commission, Perspektiv 2000. The model is really just a huge market analysis; one’s labours and loves simulated so that a bureaucrat can guess when investment in a steelworks will be amortized in a higher reality. On this point, Fassbinder’s film trumps the American book on which it was based; how bittersweet to view the West German postwar economic miracle, the so-called Wirtschaftswunder, as the virtualization of life. It is tempting finally to add that the only difference between Welt am Draht and our own existence is that here we live our simulated lives so that the investment in a steelworks (or a smartphone application developer) can be amortized in our very same reality. 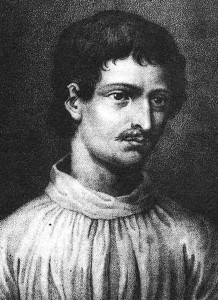 As our motto above indicates, the possibility of plurality of worlds has long since exercised philosophers. Aquinas, an Aristotelian, followed his Greek forbear in answering the question negatively. Some centuries later, Dominican friar and philosopher Giordano Bruno took Copernicus’ Heliocentric doctrine to heart, but displaced even the Sun’s privileged position at the centre of the universe. Recognizing the Sun to be just another star, Bruno posited that the universe was without centre, infinitely extensive and therefore contained in principle infinitely many worlds of intelligent beings. For his offences to Catholic Doctrine, Bruno was burned. But is such a fate not perversely appropriate for a man so prominent in overthrowing the comfort of the well-ordered Aristotelian Cosmos, where everything had a place and a goal, and who left us floating in undifferentiated space, as Bruno put it: ‘a single vast immensity which we may freely call Void’? 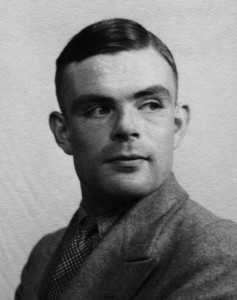 Bruno’s “crime” was to decentre humanity in the external world. The transgression of Simulakron concerns our place in the inner world; it is the splicing of René Descartes and Alan Turing. Already in 1950, Turing had devised his famous test for consciousness (much criticized since, it has to be said). A sufficiently powerful computer, properly programmed, could in theory answer questions asked by a human subject so convincingly that its inorganic status might be undetectable. Would we then be obliged to treat the machine as we do our conscious fellow humans? (Presumably the point remains moot whilst we continue to treat actually existent humans so badly as a matter of course.)

The ideational denizens of the post K. Dick SF scene share a DNA of computational capacity and emerging consciousness. Yet the inhabitants of Simulakron, Wintermute/Neuromancer in Gibson’s 1984 book, Major Kusanagi and Project 2501 in Ghost in the Shell: such Turing-bending fictional constructs do not augur the birth of a new post-human. Rather, they are a sober reminder from our own historical situation that our free will and dignity as human beings have only ever existed as a reflection in a dirty mirror.

Jack Brennan writes about the history and philosophy of science and mathematics. His latest research interest is the development of maths clubs and competitions for teenagers in the Soviet Union. He lives in London.